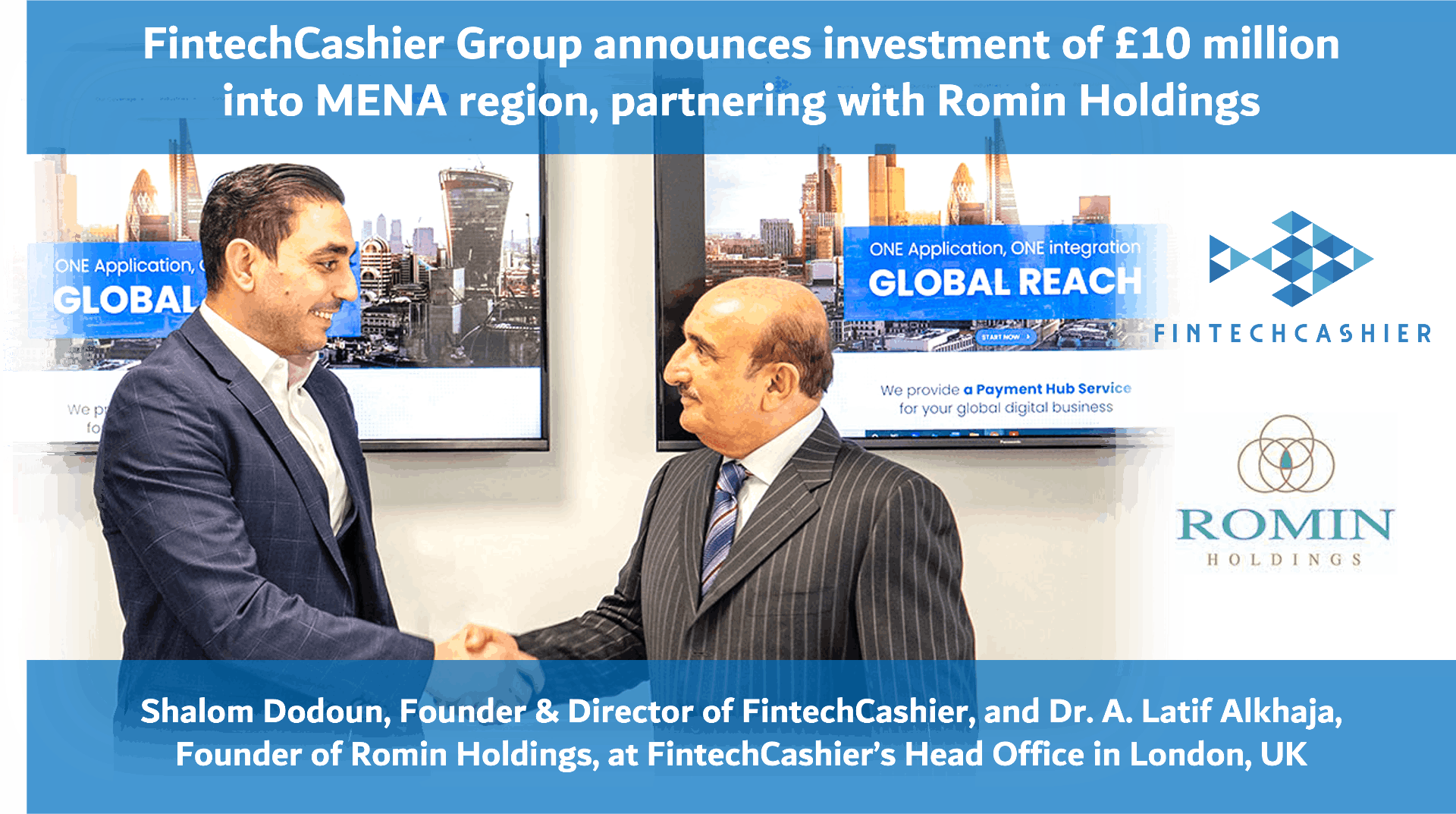 With the global digital payments market expected to reach US$ 12.55 Trillion by 2027, the
FintechCashier Group announces its investment of £10 million into the Middle East and North
Africa (MENA) region. With its partner, Romin Holdings WWL, the UK-based innovative fintech is
creating a financial gateway centre based in Bahrain expanding its services to the fast growing
digital payment solution merchants in this part of the world.

“Romin Holdings is a prestigious global investment and business development company with over 30 years’ experience, diverse interests and capabilities in the MENA region, and is the perfect partner to expand our digital asset investments in the region with.” states Shalom Dodoun, Founder & Director of Fintech Scion Ltd., the holding company of FintechCashier.

According to a recent report by the World Bank on the digital economy in the MENA region, “fully
digitalizing the economy could lead to a rise in GDP per capita of at least 46% over 30 years, or in
dollar terms a long-term gain of at least $1.6 trillion. During the first year, this GDP per capita gain
for the region would be almost $300 billion”. MENA countries include Algeria, Bahrain, Egypt, Iran,
Iraq, Israel, Jordan, Kuwait, Lebanon, Libya, Morocco, Oman, Qatar, Saudi Arabia, Syria, Tunisia,
United Arab Emirates and Yemen.

Dr. A. Latif Alkhaja, distinguished Founder of Romin Holdings and Shalom Dodoun met at FintechCashier’s Head Office in London to confirm the £10 million investment including ongoing discussions with the Central Bank of Bahrain to open a category one investment firm.

FintechCashier Group is an international financial technology company delivering financial
payment services through its ONE Application, ONE Integration, GLOBAL REACH Payment
Gateway. Their solution providers include licensed and authorised entities worldwide including
UK Fintech Digital Solutions who are authorised by the Financial Conduct Authority, as an EMD
Agent (FRN: 902993) and are permitted to distribute/redeem electronic money (e-money) and
can perform certain other payments services, within the United Kingdom under the Electronic
Money Regulations 2011 and the Payment Services Regulations 2017. FintechCashier guarantees a
seamless, transparent, and fast portal for their clients around the world to receive the transaction
related funds of their customers, to manage their cash flow, and to make settlements.
FintechCashier supports a wide spectrum of payment services, ranging from credit
card processing, foreign exchange, eCommerce and wire solutions. ONE Application, ONE
Integration, GLOBAL REACH. https://www.fintechcashier.com/

Fintech Digital Solutions Limited (FintechCashier), is a company registered in England and Wales with Company Number: 13183254 and authorised and regulated by the Financial Conduct Authority with FCA license no. 902993. Our registered office is located at 1-2 Charterhouse Mews, London, England, EC1M 6BB, with London Headquarters at 2 Portman Street, W1 6DU, London, United Kingdom.
Go to full Licenses >>

We are here to help you with all of your connected payments needs.